The Association of Black Anthropologists condemns, in no uncertain terms, the ongoing terrorism waged against Black U.S. communities by the state, police, and White vigilantes. We condemn the executions of our boys and girls, women and men by the police in Ferguson, Staten Island, Saratoga Springs, Los Angeles, and throughout the country. We also recognize that these forms of state violence are perpetrated against Black people globally. We are enraged by the fact that no police officer has been indicted in the recent murders of Aiyanna Jones, Michael Brown and Eric Garner; and we are outraged that in the hundred days since the murder of Michael Brown, police have also murdered unarmed Ezell Ford, unarmed Tanisha Anderson, unarmed Roshad McIntosh, unarmed Akai Gurley, unarmed Dante Parker and unarmed Kajieme Powell. These are state-sponsored massacres of our people, massacres enabled by a long history of national and global anti-Blackness.

As it pertains to the ongoing atrocities of the criminal justice system in this country – alongside those who spoke before the United Nations in November, we charge genocide.[1]

As members of the academic discipline with the distinctive history of establishing the language and “science” of race to justify settler colonialism and slavery, we recognize full well that the root of today’s anti-Black state-sponsored violence in the U.S. is white supremacy. We know that our discipline played a significant role in developing the trope of a particular Black subject – the “urban” Black – that has been deployed by society at large to dehumanize Black people.  At the same time, we also realize that our discipline has been tepid in fruitfully acknowledging and addressing its own white supremacist foundation. We therefore call on our colleagues in the American Anthropological Association to join us in not only condemning this history but also in affirming that Black Lives Matter – beyond the role of ethnographic subjects and cultural vessels. We call on our colleagues in anthropology to stand against the U.S. state’s terrorism against Black and Brown peoples. We call on our colleagues to join us in demanding redress and restitution, with expediency.

As anthropologist Zora Neale Hurston is known to have said, “If you are silent about your pain, they will kill you and say you enjoyed it.” We will not be silent. For members of the American Anthropological Association to be silent at this time given our discipline’s historic complicity in establishing the current order, and when we have the means to make a difference, is criminal.

ABA at the 2014 AAA Annual Meeting in Washington, D.C.

For more information on the 113th Annual Meeting of the American Association of Anthropologists to be held in Washington, D.C., visit the AAA general information page. Specific ABA conference events will be posted soon.

ABA Statement on The Dominican Republic

The Association of Black Anthropologists (ABA) condemns the recent ruling by the Dominican Republic’s Constitutional Court on September 23, 2013 (Ruling 0168-13), which has created a volatile human rights crisis in the Dominican Republic. As other outraged organizations like Amnesty International, CARICOM (Caribbean Community), the Haitian Studies Association, the National Bar Association, and the governments of Guyana, Trinidad & Tobago and St. Vincent and the Grenadines have observed, the court ruling does the following:

As a result of the ruling, people of Haitian descent are being stripped of their rights and deported.

In the spirit of the Haitian Revolution, where people of African descent fought for the right to live dignified lives, we call for an end to the current violence perpetrated against Haitian-descended Dominicans, an end to the deportation of people of Haitian descent, and a prompt resolution of this serious matter. Let us all stand together and act in the interests of humanity and human rights and allow people of Haitian descent in the Dominican Republic to lead safe and dignified lives.

The ABA seeks to ensure that people studied by anthropologists are not only objects of study but active makers and/or participants in their own history. In a larger sense, we intend to highlight situations of exploitation, oppression and discrimination.

ABA at the AAA Annual Meeting in Chicago 2013 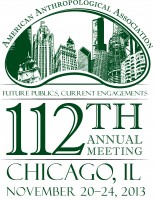 The 2013 annual meeting theme Future Publics, Current Engagements invites discussions about how anthropological theory and method can provide insight into the human past and emerging future. Read More.

A list of submission types and requirements are listed on the AAA website at: Proposal Submission Types.

Check back soon for more updates!